Chronicles of an Extreme Yandere

Chronicles of an Extreme Yandere Chapter 4

Chronicles of an Extreme Yandere Chapter 4 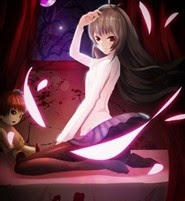 Here's chapter 4 of CEY!  I realized that this was a relatively short chapter, so I've decided to blast this out first =x

Here's an important annoucement to know for a CN series regarding CEY:

Upon discussion, we've decided that for name appendices like "onee-chan" or "ototo" to "Xiao-" or "da'ye", we will implement them in the following order:

1) Use japanese appendices as a first priority if available,
2) Otherwise chinese appendices is used as an alternative.
3) Meanings for appendices not explained in previous chapters before will be provided

Reasoning is that, it somewhat sounded more endearing when appendices are in the japanese form. (I ain't racist, i'm a chinese alrite!!)

☆A day before Bo Yuchen's house got burnt down————

(TL: it sounded abit weird in the original so I've cleaned it up slightly)

There was no response, even after waiting for a long time.

However, Shou Yuqian didn't become depressed. Her hands searched for a small key within her backpack and easily unlocked the anti-burglar door, before walking towards upstairs.

Nothing could be happier than seeing Bo Yuchen, Qian thought to herself.

But when she opened Yuchen's house door, she noticed that there was a stranger that she didn't recognize searching underneath the television cabinets for something.

"Ohhhhhh, you're Yuchen's family is it."

"Who are you." Qing's voice was very cold.

"I'm the one who stayed beside xiao-yuchen, Chen-bo. I was thinking about helping xiao-yuchen repair his television."

(TL: '-bo' appendice is to describe an elderly close-relationship uncle in this context)

"What are those things inside that bag?"

There was a rather large slingbag slung over Chen-bo's back. The zipper on top of it wasn't zipped up, and a few wire-cutter or some electrical wire stuffs were exposed from within.

"Ah, It's only a few needed electrical tools."

"Was it Yuchen that asked you to come along, when was it?"

"Yesterday at around 9 plus, i think. Yuchen suddenly gave me a call last night, saying that he was unable to watch the television. Hrrumph, nowadays youngsters are just like that, they don't even know how to repair a television."

He then stood up and plugged in the power supply, and immediately the television had images displayed on it.

"Alright, well then I'll head off first then, squatting for too long really does hurt my bones a little."

Chen-bo quivered as he walked past Qing towards the door.

"What about the money for repairing the television?"

"Ohhhhh. You see, this memory of mine, I'd nearly forgot about it. Well, it's not that big of an issue, so about a hundred dollars will do for the repairs."

Qing silently scrummages a hundred dollar note from her pocket, and handed it over to Chen-bo

After receiving the money, Chen-bo politely bowed towards Qing, and later when he reached home, he took out a bottle of white wine that he had just purchased that morning, while humming an old song from decades ago, as he switched on his 42 inch big newly bought television that he had just "earnt".

"Aiya~aiya, as expected, when a woman gets prettier the dumber her becomes in return, she can't even detect such an obvious act, heh heh, maybe I should find a time to trick her over to have some fun with her body~"

Just as Chen-bo was muttering to himself while he drank the white wine, his senses were already dulled by the alcohol, thus he completely didn't notice footsteps approaching him.

"Ah~ I didn't knew that Yuchen's old man was so rich, this golden ring would probably worth a few thousand, plus some other accessories and so, I think that I could probably enjoy for quite a while longer."

Chuckling, he took out accessories and more accessories from his pockets, and after playing around with them he divided them into two categories: one for his collection, and one for selling off; this would probably be Chen-bo's biggest steal of his entire life of thievery. But don't misunderstand this, Chen-bo didn't steal for the sake of needing money, to put it in his words, it is merely a hobby similar to people doing morning exercises. Although he already long aged past retirement, and had a son who owned a business as well as a grandson who made it to a famous school, Chen-bo thought that these matters had nothing to do with him being a thief, so while he acted a kind and benevolent appearance to his neighbours, he did some devious deeds to them behind their backs.

After drinking almost an entire bottle of white wine, Chen-bo's consciousness began to blur. As he walked unsteadily to switch off the kitchen's gas stove, a sudden push caused him to fall down onto the floor, and him being already heavily intoxicated, became knocked out just from that fall.

"What a piece of trash!"

A shadow of a person with a slender figure walked in from behind. That person, wearing a pair of gloves, grabbed Chen-bo's hands which were still grasping onto the neck of the bottle of white wine, and lifted it onto the position of the fire of the still-on gas stove, afterwards switching on the gas to it's maximum.

The person was Qing, whom Chen-bo initially thought was successfully fooled. To see Qing taking back whatever Chen-bo had stolen before leisurely closing the house door, and soon later, a sound of explosion came from within.

At that moment, on her face had an expression that a normal person wouldn't have.

After the house had been burnt down, I had no choice but to stay with nee-chan who still had her duties as a teacher, and of course I myself felt rather uneasy about it, since it's a teacher's job to prepare for her lesson, and if nee-chan takes care of me it would be akin to increasing her burden, but the other party told me not to worry about that sort of thing, and is also extremely welcoming about my stayover.

"Well then nee-chan will go and make dinner first~ xiao-chen you can go ahead and watch some television~ oh but you can go look at your new room too first if you want."

"I'll go look at the room first then."

"It's the second room on the left from the toilet~"

Opening the room door, I noticed that the beddings, study table, and even computer were all fully prepared, it's like as if it was being readied for this moment for a very long time, and as I slickly touched the surface of the book table as well as some random corner of the room, there wasn't any speck of dust anywhere!! I wasn't sure of that, but I somehow can't shake the feeling that the decor in this room, was somehow tailored for me in the very first place.

I hastily stood up from the bed, and when I was en route towards the living room, a seemingly concealed door caught my attention.

A very nice smelling fragrance seemed to have come from it.

Unconsciously, my hand stretched towards that wooden door.

Smiling, nee-chan was grabbing onto the hand that I've placed onto the doorknob.

"You can't just go into a girl's room like that~"

I hastily withdrew my hands, and followed nee-chan to the dining table.

Same as last time when she cooked at my place, nee-chan's dishes all still tasted extremely delicious, making it rather hard to believe that these food were made from such a young lady.

"Nee-chan's dishes all tastes quite delicious."

Strangely though, she still hadn't touch her chopsticks, and only had a smiling expression as she stared fixedly at me, her hands resting on her chin with a somewhat intoxicated expression on her face.

And the surroundings again had just only the sound of me eating up my dinner. Although nee-chan didn't really seemed to mind that, I felt that the atmosphere is somewhat awkwardish.

"Nee-chan, how old are you this year?" Although I tried to slightly liven up the atmosphere, after I opened my mouth I realized that I had asked such a dumb question.......

"23 years old, and it's fine, whatever xiao-chen asks, nee-chan will always answer them~"

Suddenly, my eyes floated onto an object placed not far from us currently. It looked like a chain used to collar a dog up.

"Nee-chan, you had owned a pet dog before?"

I then remained silent, and the surrounding atmosphere immediately went back to being silent. Although I understood the meaning of the idiom [When eating, one shall disturb by talking; When sleeping, one must not disturb by speaking], it wasn't a pleasant feeling to have someone so fixedly staring onto you, smiling continuously as you ate your food.

(TL: IKR. I had that feeling before. You would have the chills.)

I laid against the balcony, and while I enjoyed the night breeze accompanied from living on a high building, I also stared at my milk tea which I was holding onto with a somewhat lifeless expression.

It was the first time that I couldn't sleep when it was midnight.

I sent a message to Guan Guo who's similarly still online in Q.

(TL: By Q, he's referring to <QQ messaging>, a china platform for chat messaging. Think of it as discord)

"Oioi, what kind of a half-hearted response is that."

Just as I was about to send another message, one came out from Guan Guo's side: Lao'zi am in the midst of a fierce battle right now, don't disturb me.

(TL: lao'zi is a china slang, used to describe oneself as if he himself is an elderly person deserving of respect from others; as in china, it is an untold law to always respect your elders. Also, this way of speaking is informal, and may be slightly snobbish or rude to use.)

Heh, this fella must be really having a wild time.

I looked towards the clock, it's now roughly midnight 2 AM plus. I then sent a text message 'Go look at your brother' to Guan Ting, and after a short while, Guan Guo's QQ status switched to offline.

But, explore huh, it seemed like a not bad idea after all, plus there's something that piqued my curiosity.

Silently, I crept towards the front of nee-chan's door, and as expected, the door wasn't locked, so I discreetly opened the door room, and poked my head inside.

But at this very moment, my consciousness had vanished.

TL thoughts: Mr Chen-bo, your luck sucks to the max. Why? You are talking to someone, who very possibly and realistically could have stalked Yuchen to the point of her knowing every possible action that Yuchen does, and i won't be surprised if she already had 360' surveillance 24/7/365 of the entirety of Yuchen's house.

Stay informed of NEWEST chapters of Chronicles of an Extreme Yandere with notification directly sent to your email.