I was about to pull up the heavy metallic cover of the garbage chute, but there was a weird steam puffing out. A steam that seemed to be a mixture of the unpleasant smell of a variety of things like rubbish in fermentation, ink of old magazines, wet soil and alcohol. I really hated to do so, but I had to open the chute.

I was being chased after.

It was the only downtown area of this backwater town. You might have never seen this district, but it was almost like a miniature version of the dangerous zones and red-light districts in movies or TV dramas. Within this town, it was the only area that owned the real, authentic night.

Swarms of patrol cars were zooming around this night district while ringing their sirens. When it seemed like they were about to come from one direction, another group also rushed in in from the opposite side. They were apparently searching for something.

They must be looking for Girl A - Kana Sugomori (15), I anxiously thought. In fact Kana Sugomori, or me, was being chased after by the police. The alleged charge against me was undoubtedly manslaughter or attempted manslaughter.

ーー I almost broke into tears.

I was only a 15-year-old girl. While I was running, I tried my best to scrape off onto my jeans my stepfather's blood which stuck on one of my hands. Eventually I lost my way in a back alley and found a gigantic garbage chute that looked almost like a coffin.

The garbage chute was located next to the back entrance of a large multi-tenant building, with a rectangular chute that allowed rubbish from each floor to fall onto the garbage tank on the ground. It was the final destination of garbage - the best place to hide myself - even if it was smelly. I put in all my strength and pulled up the metallic cover.

There was already a visitor earlier than me.

Amidst the smell of fermented garbage and steam with the colour of soil, there lay a naked body with pure white, or more accurately snowy white skin. With her eyelids closed and her long hair spread on top of the garbage, she looked like a modern, poor-taste version of Snow White or Sleeping Beauty from the fairy tales. It was difficult to imagine the spotlessly clean skin of this naked body was in fact the same type of human skin I had seen for so many times in the changing area in school or during school trips. Almost like belonging to an alien creature, the texture was incredibly fine, and even without touching it one could tell it was icy cold. There was a steam of cold air rising from it, chilling everything around. Even the old magazines. Even the bitten apple skins and cores. Even the bottles of German beer that were thrown away before their owners had finished drinking them

ーー Her long hair was reddish-brown in colour. Her face - it was hard to tell with her eyelids closed, but it was a delicately and naturally gorgeous face like those on Japanese dolls. The facial structure was as perfect as a complex mathematical formula. A face that was too beautiful - so beautiful that no one could feel the slightest emotion of anger or jealousy against it. The protuberances on her chest were humble in size. Even the incredibly slim waist did not stand out, thanks to the soft and fragile bulges on her chest and buttocks.

This earlier visitor was holding an object.

On her stomach, a flat white belly that was like a small mountain base silently covered by snow, abruptly lied the shiny black, rugged pistol. The girl was holding the pistol with her tiny hands. As if ready to shoot at a certain someone, she grasped the pistol tightly. In contrast with her calm and peaceful face, the whole picture was completely out of balance.

ーーThe noise of the sirens from far away was coming nearer and nearer. With chilly winter gusts blowing through the buildings, despite wearing a thick coat I could not stop shivering. 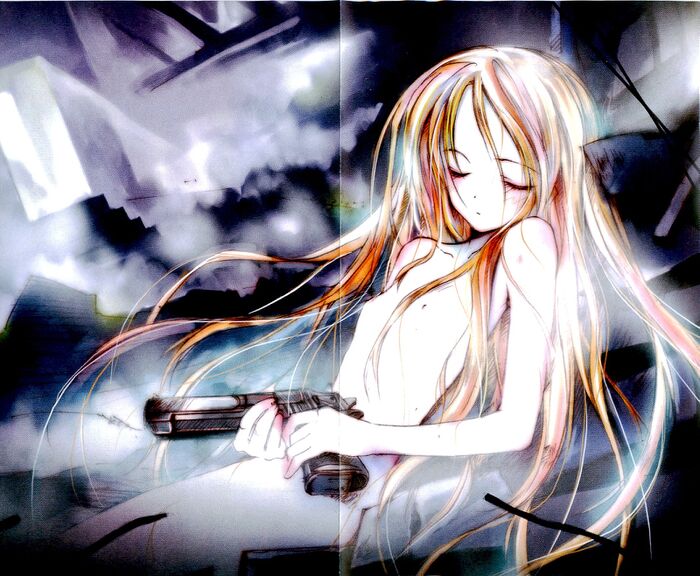 Stay informed of NEWEST chapters of Suitei Shoujo with notification directly sent to your email.